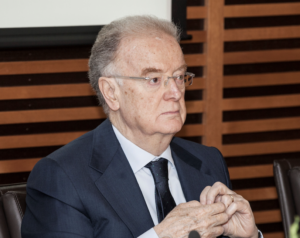 After graduating from the Lisbon University Law School in 1961, Jorge Sampaio became a well-known lawyer who played an important role in the defence of Human Rights and of democracy in Portugal, later specializing in Intellectual Property law. A member of the Human Rights Commission of the Council of Europe (1979-1984), he was successively member of the Portuguese Parliament (1979-1995), head of the Portuguese Socialist Party (1989-1991), Mayor of Lisbon (1989-1995) and President of the Republic (1996-2006). In 2006, he became the United Nation’s High Representative for the Alliance of Civilizations, and in 2013 founded the Global Platform for Assistance to Syrian Students, following the humanitarian crisis resulting from the Syrian Civil War, of which he was President and a strong advocate, just recently announcing that an emergency scholarship programme is being prepared for young Afghan students.

President Jorge Sampaio was the keynote speaker in the 2013 Annual Congress of the U.A.E., held in Lisbon under the theme The Economic and Financial Crisis in Europe: on the Road to Recovery?, and subsequently became a cherished honorary member of the Association.

The Board of the U.A.E. expresses its deep regret for the death of President Jorge Sampaio and offers heartfelt condolences to his family.